Is Racism in God’s Will?

Is Racism in Gods Will?

Today we as Christians find ourselves in a battle like never before.

The moral value seems to be decaying more and more each day. Across this land we hear sermons and preachers speaking on topics such as homosexuality, transgender, the drug epidemic that’s plaguing our community. These are all topics that need to be dealt with and should be addressed.

But what about the evil of racism that’s in the church today that has caused division in the body of Christ and this nation?

The other day I saw a program on the news and they were at a White supremacy meeting and one of the gentlemen there had his face hidden and his reply when ask was I can’t show my face because I’m a Baptist preacher.

I remember about six months back to a year ago when it seemed as though every time I  turned on the news we were hearing about rogue police brutality and how unarmed black men were being shot. And as one Pastor said that these weren’t just shootings, these were executions. At that moment I felt that some of my fellow none black Christian brothers cared. I would hear  about the comments that Christian were posting on face book about the  killings and defending the police officers who committed these murders  and I must say that it broke my heart to hear from people that are Christ 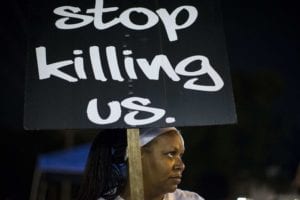 ians speak in  this manner as though these lives had no value. God  calls for unity  in the body of Christ and I felt like there was no  compassion in the  church and what the African American community was going through  during this time. Romans 12:15 says rejoice with those who rejoice  and mourn with those who mourn. While some of us were mourning it  seems like others were rejoicing. This by all means is not just a  problem in the White churches but the Black churches are just as  guilty. I remember racial comments and angry words against white people coming from people in the black church as well as the black community, and I knew that this was not right. I asked myself, where is the unity and the love for one another?

The whole idea of Racism and bigotry really comes down to value and worth.

When one race feels that they have more value or worth than another then that gives them the mindset that they are more superior. How can we as a body be unified if one race of people continues to feel they are greater than the other? One thing we know from the word of God is that when Jesus Christ shed his blood on Calvary is was for every human and that tells me that God values each person equally regardless of skin color or nationality.

Here are some scriptures that tell us that God requires unity in the Body of Christ.

But if you show partiality, you are committing sin and are convicted by the law as transgressors.

I’m going to close with this:

Jesus said that the two greatest commandments were “Love the Lord your God with all your heart and with all your soul and with your entire mind. This is the first and greatest commandment. And the second is like it: love your neighbor as you love yourself. So let’s do our best as brothers and sisters in Christ regardless of our skin color to show love to one another as Christ has commanded us to do and to remain unified as a body and Stomp out this evil called racism and bigotry that has been infecting our church.

Rodney K. Burke – An associate Pastor at the Abundant Life Church of God