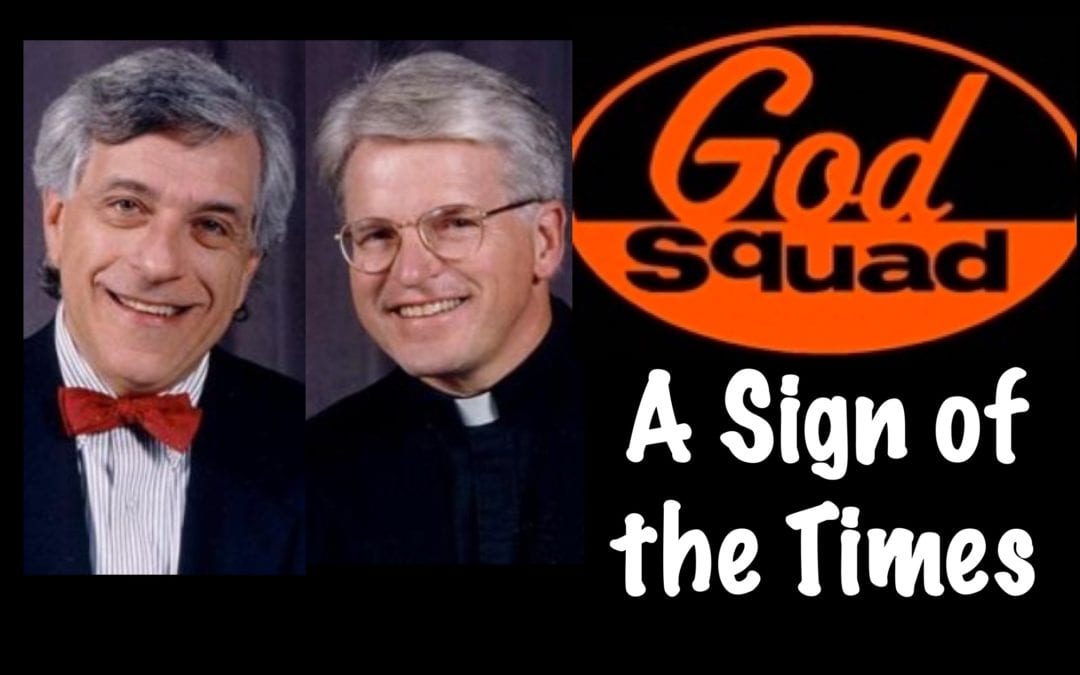 Recently a friend of mine gave me a short clip out of a local newspaper to read (see below) and asked my opinion about what it said.  My friend knows that I’m a Christian and where I stand on issues of faith, but I think he was trying to get me to see a “broader” picture of the world and God.  That’s just a speculation on my part, but I’m fairly certain he was trying to communicate something to me.  I’m attaching the article below for you to read as I will be addressing it in the words to follow.

The clip was written by Rabbi Marc Gellman who shared a weekly column with a Roman catholic priest named Tom Hartman.  Together they formed what was known as the “God Squad”.  They would field questions about God and life from their respective positions and offer advice and guidance to their readers.  The “squad” came to an end when Tom Hartman passed away in February of 2016.  Over the years the two men became good friends and were very amicable toward their readers on both sides.

The article comes in response to a request that Rabbi Gellman made of Tom should he be the one who passes away first.  The Rabbi’s request: a sign from heaven from Tom.  In the attached clip, Gellman describes the sign he received from him and how it shapes what he knows.

I’d like to address several issues I have with the article that deal with truth, scripture, experience, and deception.

First let’s deal with truth: the truth of Judaism and the truth Roman Catholicism.  Both believe in God, heaven, hell, sin, creation, angels, the Torah, a Messiah, and mankind as the image bearer of God.  So far so good.  The one major difference they hold concerns Jesus: one says he is the Messiah, the other says he isn’t.

Now that’s a serious theological difference, and they both can’t be right.  It’s one or the other but not both.  Jesus can’t be the Messiah and not be the Messiah at the same time.  That would be a contradiction and render truth relative.

Since Jews claim that there is a way to heaven and Roman Catholics claim another way, it’s obvious that both can’t be right.  If both are right, then religion, the scriptures, and the Messiah are irrelevant.  None of this theological “stuff” would seriously matter in a real sense since everyone goes wherever they want when they die regardless of their beliefs.  In that case, truth would be whatever you want or whatever you believe it to be.

Sadly, I suggest to you that this is what the clip written by Rabbi Gellman actually leads to!

…And to be honest, I think the rabbi’s feeling are getting in the way.

Now let’s take a look at the scriptures.  This is where we get to hear what God has to say, and where both Jews and Roman Catholics find their doctrine and their differences.  Rabbi Gellman begins by citing both Jewish and Catholic traditions and their prohibition concerning spirits, mediums, and talking with the dead.  He would go further and quote several scriptures that support those traditions.  At this point it seems that both religious traditions agree with each other and have the backing of God’s word – i.e. talking to the dead in any form is prohibited.

Here’s where Gellman’s experience comes in.  According to the rabbi, his friend Michael was praying while shaving the morning before they met for lunch and “addresses” Tom (the priest who passed away).  Tom answers him apparently and tells him something that only Geller would understand, that “Sol was in charge”.  Gellman hears this and is blown away!  That was his dad’s name and his dad was always a take charge guy.  To him, this is amazing news and “clearly” the “sign” he’s waited for.  It’s here I sympathize with Gellman as I think his heart for his father and friend may be clouding his judgment.

Despite all of the scriptural indications, and the fact that each of their respective religions condemn such an action, Gellman buys into the “sign” as if it were a certain truth from Tom.  All he knows is that Tom was ok, and his dad was not just ok but actually running heaven.  Although a tender thought, Gellman knows this goes against everything he’s stood for.

Sadly, here is where the deception comes in.  Is this “sign” true because it conveys a fact that no one else would know?  I don’t think so in light of the scriptures.

Isn’t the devil a liar who comes to steal kill and destroy?  Absolutely!  How does the rabbi know this isn’t a demonic messenger masquerading as an angel of light?  The scriptures do warn us of such things.  Now add the fact that God’s word clearly warns against such activities, as well as the respective catechisms of both faiths, and you now have an opportunity for deception to creep in.  We can easily be led by subjective feelings and not objective truth.

The last words of Gellman are telling: “I don’t care about the biblical prohibitions this sign violated.  I do care that my dad is in charge of heaven”.  Let me translate: I don’t care what God said about signs or contact with the dead because I had an experience that makes me feel good, and hey, my dad’s in charge of heaven anyway!  In this case, because Gellman is emotionally comforted by this “sign”, he thinks his experience trumps God’s truth which gives him license to deny it.  In doing so, he ends up denying the religious tradition he’s held so dear all his life and was formally trained in.  This highlights the biblical truth that mankind is easily susceptible to being led by it’s emotions.

Ironically, Gellman’s discarding of the scriptures is a “sign” for anyone who builds their life on the teaching of the bible.  David’s son Solomon would tell us in Proverbs 1:7 that “The fear of the LORD is the beginning of knowledge; fools despise wisdom and instruction.”  Gellman succumbs to this in denying the bible’s clear teaching on communication with the dead and seeking after signs.  I feel his pain, but his emotionalism is a “sign” of the times and religious relativism.

Gellman finally says, “there’s no rational way to explain this” and he’s right.  If you abandon God’s word (the source of all knowledge and Gellman’s own religion) you’re throwing rationality out the door.  Using man’s limited understanding and emotional experience to base decisions on is not a good idea. (Prov 3:5)

Think about what this situation is communicating to us.

The stakes couldn’t be higher for the people reading this article since Gellman is such a well respected man in the religious community.  Many people may misread his words and be duped into thinking that entering eternity is as simple as dying.  I can hear them saying “All roads do lead to God because there are two men with competing religious traditions who are in heaven together – we have a clear ‘sign!’”

But nothing can be further from the truth.  Here I’m reminded of the words in Malachi 2:17:  You have wearied the LORD with your words. But you say, “How have we wearied him?” By saying, “Everyone who does evil is good in the sight of the LORD, and he delights in them.”

Gellman does leave himself an out at the end of the article when he states “on other days I may know more, or… differently, but today this is all I know.”  I sense he is conflicted between the “sign” he received and everything he thought he knew up to that point.  The emotion is real and the love for his dad is deep.

Seeking for a “sign” from heaven is nothing new, but if you still want one, listen to what Jesus says, “Then some of the scribes and Pharisees answered him, saying, “Teacher, we wish to see a sign from you.” But he answered them, “An evil and adulterous generation seeks for a sign, but no sign will be given to it except the sign of the prophet Jonah. For just as Jonah was three days and three nights in the belly of the great fish, so will the Son of Man be three days and three nights in the heart of the earth. Mt 12:38–40

Jesus provides us with a sign that points to him as the one who will be crucified, buried, and raised from the dead conquering death and the grave.  That was a real sign, that really took place, and it radically changed the world going forward.

My hope is that you see how easily we can be swayed into trusting experiences that are specifically warned about in scripture against trusting in the authority of God’s word alone.  One will guard you from being deceived and save you, the other will betray you and lead you astray.

I am truly sorry for your loss Rabbi Marc, but respectfully the bible says that my Heavenly Father is in charge of heaven no matter what kind of sign anyone else gets.

Standing on the unchanging word of God guards us against the instability of our emotions.