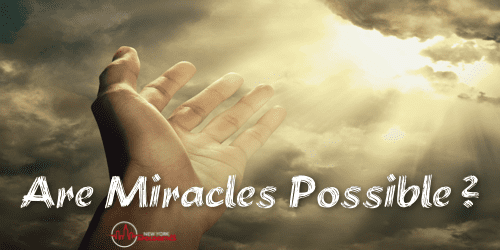 This question is most important because if miracles are possible, then theism would have to be true.

Only in a theistic worldview are miracles even possible, because you would need to have a being that could manipulate or overcome the physical laws of our universe. What type of being could possibly accomplish this?  An infinite, supernatural, personal, powerful being beyond the natural world.

Has a miracle taken place?

I would imagine that millions of people throughout the ages have testified to miracles in their own life. Even today we hear people testify how their lives, marriages, and even physical needs have been touched by what they would call a supernatural miracle. Theists!

What about the greatest miracle of all time?

Many would consider this to be creation of the universe. The bible which contains and reports many miracles,  has written within the first sentence of Genesis 1:1 the miracle , “In the beginning, God created the heavens and the earth.” (Universe)

Science has come to the common view like Genesis, that the universe came into existence a finite time ago.

The difference between the scientific version and the biblical version are twofold:

First, the bible has always posited the universe coming into existence out of nothing a finite time ago, whereas science has more recently come to that consensus.

Secondly, the bible tells us that God (the greatest conceivable being) brought the universe into existence, whereas science has no real explanation at this time.

Either biblically or scientifically we can conclude that since the universe was not there until it was, that whatever caused the universe must be outside the universe, and by extension the laws of physics.

My feeling is that scientific method has the power to account for and interlink all phenomena in the universe,

including its origin, using the laws of nature.  But that still leaves the laws unexplained. – Physicist Paul Davies