3 Reasons Every Christian Should Know the Moral Argument 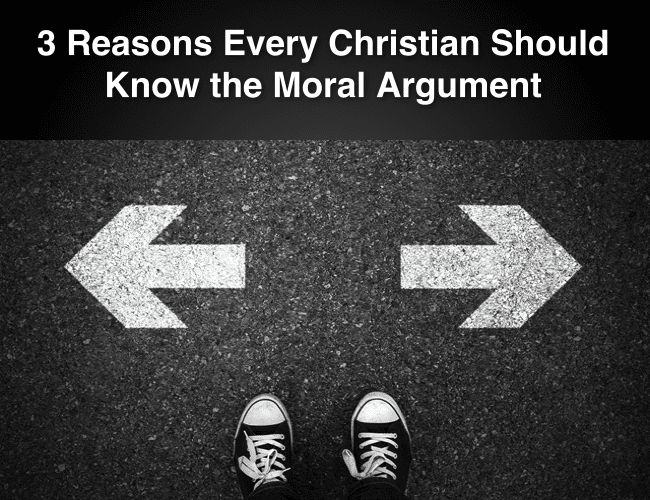 If you believe in God you definitely want to become familiar with the Moral Argument.

This argument shows how almost every person on the planet is effected by God’s moral law in the form of Objective Moral Values and Duties that cannot be accounted for it outside of God’s very nature.

Three reasons to know this argument

2. The Argument in its logical form is a most powerful ally

3. Very hard to overcome this argument.

Here Paul talks about the foundation for the moral argument. “The Law written in their hearts”.

14 For when Gentiles who do not have the Law do instinctively the things of the Law, these, not having the Law, are a law to themselves,

15 in that they show the work of the Law written in their hearts, their conscience bearing witness and their thoughts alternately accusing or else defending them,

16 on the day when, according to my gospel, God will judge the secrets of men through Christ Jesus.

Reason # 2 – The Argument in its logical form

Here are three versions of the Moral Argument:

1. C. S. Lewis (1898–1963) in the first part of his popular book Mere Christianity. The heart of the argument follows this basic structure:

(2) There is an objective moral law.

(3) Therefore, there is an objective Moral Lawgiver.

2. One moral argument for God’s existence goes like this:

(a) If objective moral values exist, then God exists.

(b) Objective moral values do exist.

3. The most widely used version today.

A. If God does not exist, objective moral values & duties do not    exist.

For a more in-depth treatment of this argument click here.

Reason # 3 – The Moral Argument is Difficult to Overcome

C.S. Lewis in his book Mere Christianity lays out these four objections to the the moral argument.

This Moral Law Is Not Herd Instinct

Not everything learned through society is based on social convention (e.g., math or logic), so neither is the moral law merely a societal norm. Evidence of this is that the same basic moral laws can be found in virtually every society, past and present. Furthermore, judgments about social progress would not be possible if society were the basis of the judgments.

This Moral Law Is Different From the Laws of Nature

The moral law is not to be identified with the laws of nature because the latter are descriptive (are), not prescriptive (ought) as moral laws are. Indeed, factually convenient situations (the way it is) can be morally wrong and vice versa. For example, someone who tries to trip me and fails is in the wrong, while someone who accidentally trips me is not.

The Moral Law Is Not Human Fancy

Neither can the moral law be mere human fancy, because we cannot get rid of it even when we would sometimes like to do so. We did not create it; it is clearly impressed upon us from without. And if it were fancy, then all value judgments would be meaningless, including “Murder is wrong” and “Racism is wrong.”

This argument is can be very useful to speak to a skeptic about the existence of God as well as sharing ones faith.

If you have interest here are a few more posts that may be of interest.

The Absolute Nature of Morality

Where Does Morality Come From?

Our Sense of Moral Obligation Proves Materialism is False