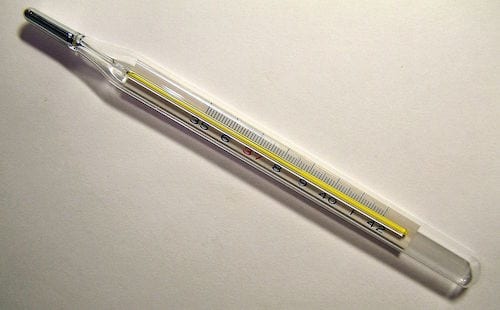 Editor’s note: Physicians have a special place among the thinkers who have elaborated the argument for intelligent design. Perhaps that’s because, more than evolutionary biologists, they are familiar with the challenges of maintaining a functioning complex system, the human body. With that in mind, Evolution News is delighted to offer this series, “The Designed Body.” For the complete series, see here. Dr. Glicksman practices palliative medicine for a hospice organization.
Previously in this series, we saw that heat is the transfer of energy from one object to another, whereas temperature is the measure of an object’s internal energy or its degree of random molecular motion. The body must control the temperature of its internal organs (core temperature) because the molecules that make up the cells and perform the functions of life work best within a certain temperature range, 97-99oF (36o-37oC).

But when it comes to heat and temperature, the laws of nature make two demands on the body. First, they demand that heat be released when energy is used to do work. So the body produces heat through metabolism. And second, they demand that a warmer object transfer heat energy to a cooler one when they come in contact with each other. Since the body is usually surrounded by air that is cooler than its core temperature, this means that it loses heat to its environment. Thus the body’s core temperature is directly related to how much heat it produces from its metabolism and how much heat it loses to, or gains from, its surroundings. To take control of its core temperature and stay healthy, the body must take into account these two laws of nature.

One can see that the laws of nature, regarding the release of heat when energy is used, affect the body’s core temperature, not only when it is at complete rest (BMR) but with any level of activity. Let’s look at how, when it comes to the BMR, the body takes control to keep the real numbers regarding its core temperature where they need to be.

Since the basal metabolic rate is the minimum amount of energy the body needs to keep its cells intact and its organs working while at complete rest, it also represents the minimum amount of heat the body releases, contributing to its core temperature. Any activity level above complete rest increases the body’s use of energy above the BMR while at the same time increasing the release of heat.

The most important hormone, which affects almost every chemical reaction in every cell of the body and therefore the BMR, is thyroid hormone. It is produced in the thyroid gland located within the neck. However, thyroid hormone does not dissolve well in water, so it needs a special protein (made in the liver) called thyroid-binding globulin (TBG) to carry it within the bloodstream. The exact mechanism of how thyroid hormone affects the metabolism in the cell is poorly understood. However, studies seem to indicate that it binds to a specific receptor in the nucleus and stimulates protein synthesis and cellular respiration, causing an increase in oxygen consumption and heat production.

Since thyroid hormone is mainly what affects the BMR and therefore how much heat is produced at complete rest, being able to control it affects the body’s core temperature. Remember, there are three things needed for the body to control something.

The first is a sensor that can detect what needs to be controlled. The hypothalamus and the pituitary have sensors that allow them to detect the blood level of thyroid hormone.

The normal thyroid hormone level in the blood is different from person to person, ranging anywhere from 60-140 units. Such a wide range of normal means that, for example, if a person’s level should be 100 units, but is only 70 units, or vice versa, then it would be difficult to diagnose a thyroid condition because their blood level would still be within the normal range.

However, with its understanding of how the body controls thyroid hormone, medical science solved this problem. A few decades ago, doctors developed a way to reliably detect the blood level of TSH. Even though there is a wide range of normal for the blood level of thyroid hormone from person to person, each person’s pituitary (and hypothalamus) know what their level really should be. The normal range for TSH in the blood is 0.4-4.2 units. So, assuming normal hypothalamic and pituitary function, this means that for a person whose thyroid level should be 100 units, but is only 70 units, his TSH should be significantly above 4.2 units, and for a person whose thyroid level should be 70 units, but is 100 units, her TSH level should be significantly below 0.4 units, often approaching zero. It is looking at, not only the thyroid hormone level, but also the TSH, that has allowed physicians to better determine the true level of thyroid function and thus diagnose disease.

The system the body uses to control its thyroid function, and with it, its basal metabolic rate, heat production at rest, and core temperature, seems to know what it is doing.Yet to accomplish this one task requires (1) the hypothalamus and pituitary to detect thyroid hormone, (2) the hypothalamus to make and release TRF, (3) TRF receptors on the cells of the pituitary to respond by making and sending out (4) TSH, (5) TSH receptors on the thyroid cells to respond by making and sending out (6) thyroid hormone, the presence of (7) thyroid binding globulin (made in the liver) to transport thyroid hormone in the blood, and (8) thyroid hormone receptors in the nucleus of the cells to affect metabolism.

Clinical experience shows that if any one of the eight parts were not present or not working properly, the whole system would fail. Such a system, whereby the absence of any one part renders it non-functional, is considered to be irreducibly complex and evidence of intelligent design. The system our body uses to control its thyroid function and BMR, and through it, its heat production at rest and core temperature, demonstrates irreducible complexity. All human experience points towards a mind at work behind such a sophisticated system. And yet, with no understanding of how life actually works, students continue to be taught that it must have come about by chance and the laws of nature alone.

However, controlling the BMR, through thyroid function, is only one part of thermoregulation. After all, just like a car, the faster the body moves and the more work it does, the more energy it needs, the more heat it releases, and the higher its internal energy and temperature. Next time, we’ll look at the other mechanisms the body uses to take control to keep the real numbers of core temperature where they need to be to function and survive within the laws of nature.

Editor’s note : Physicians have a special place among the thinkers who have elaborated the argument for intelligent design. Perhaps that’s because, more than evolutionary biologists, they are familiar with the challenges of maintaining a functioning complex system, the human body. With that in mind, Evolution News is delighted to offer this series, “The Designed Body.”