Does God Exist? – The Argument From Change 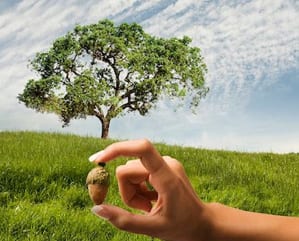 The material world we know is a universe of change. The great oak tree before us grew from the tiniest acorn. Now when something comes to be in a certain state, like size that is mature, that state cannot bring itself into being. For until it comes to be, it does not exist, and it cannot cause anything if it by chance will not yet exist.
As for the thing that transforms, though it can be what it will become, it is not yet what it’ll become. It really exists right now in this state (an acorn); it’ll actually exist in that state (large oak tree). But it is not really in that state. It simply has the potentiality for this state.

To explain the change, can we contemplate the matter that is changing alone, or must other matters additionally be affected?

Obviously, other matters should be entailed. Nothing can give itself what it does not have, and the shifting thing cannot have now what it’ll come to get then. The result of change cannot really exist before the change. The shifting thing starts with just the possibility to change, but if that possibility will be to be made real, it has to be acted on by other matters outside. Otherwise it cannot change.
Itself alters. Apparently self moving things, like animal bodies, are moved by desire or will–something other than mere molecules. And when individual or the creature dies, the molecules stay, because the want or will isn’t any longer present to transfer it but the body moves.

Are the other things outside the matter that is changing also transforming? Are its movers additionally moving?

The universe is the sum total of all these moving things, however many there are. The whole universe is in the procedure for change. But we’ve seen that an outside force is required by change in any being. Therefore, there’s some force outside (in addition to) the universe, some real being transcendent to the universe.
Briefly, if there is nothing outside the material universe, then there is nothing that can cause the universe to change. But it does change. Therefore there must be something in addition to the material universe. But the universe is the sum total of time, space and all matter. These three things depend on each other. Hence this being outside the universe is external space, matter and time. It is not a thing that is changing; it’s the unchanging Source of change.

The Argument from Change (or Motion):

The Argument from Motion:

1. Adapted from the writings of Peter Kreeft