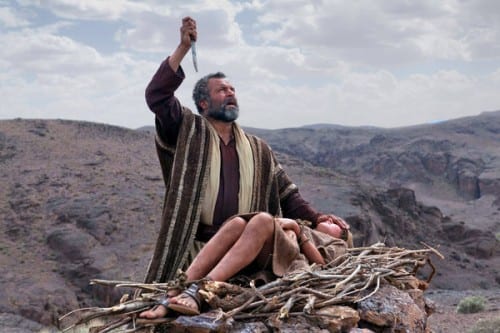 A mom posted in a Christian Facebook group recently about her daughter’s struggle to understand why God told Abraham to sacrifice Isaac. Genesis 22:1-2 says:

God tested Abraham and said to him, “Abraham!” And he said, “Here I am.” He said, “Take your son, your only son Isaac, whom you love, and go to the land of Moriah, and offer him there as a burnt offering on one of the mountains of which I shall tell you.”

Her daughter asked why God would tell Abraham to kill his own son, which, she said, would be a “wicked” command. The mom was looking for help on how to explain to her daughter that this event doesn’t make God wicked.

There were dozens of Facebook comments in response to her post. But the most popular one, based on “likes” from others in the community, encouraged the mom to share that we don’t always have all the answers and to tell her daughter to pray about it.

Generally speaking, I couldn’t agree more that we need to acknowledge to our kids that God hasn’t told us everything we’d like to know and that there are some things we just don’t have answers for. I tell my kids this frequently…when they ask questions there truly aren’t answers for.

But we do our kids an incredible disservice when they ask questions that do have biblical answers and we either 1) tell them no one knows, or 2) give them a wrong answer.

In this case, the Bible absolutely does give us an answer. And if we fail to give our kids that answer, they may eventually find the skeptic’s answer to this and related questions more compelling: that God is immoral and the Bible supports human sacrifice (one popular site calls God’s command to Abraham “pure unadulterated evil”).

I address the question of whether or not the Bible supports human sacrifice in Chapter 32 of Keeping Your Kids on God’s Side: 40 Conversations to Help Them Build a Lasting Faith. I provide answers in that chapter on God’s command to sacrifice Isaac, the reason for Old Testament child sacrifices, Jepthah’s vow (Judges 11:29-40), why God commanded the consecration of firstborn males (Exodus 13:2), the burning of Achan (Joshua 7:25-26), and the question of Jesus’ “human sacrifice” on the cross—all examples that skeptics give when they claim that the Bible condones human sacrifice. Since the question of Abraham and Isaac is a particularly common one, I wanted to share the relevant book excerpt with you today.

In Genesis 12:1-2, God called Abraham to leave his family and go to a land He would show him. God promised that through Abraham’s descendants all the families of the Earth would be blessed (as we later learn, Abraham would become the ancestral father of God’s chosen people, the Israelites, and ultimately of Jesus Himself). Abraham obeyed and left his homeland. However, he later questioned God’s promise because his wife, Sarah, had not become pregnant. God reiterated His promise, saying that Abraham would have an heir.

Meanwhile, Sarah took matters into her own hands by offering her Egyptian servant, Hagar, to Abraham as a second wife who could bear a child. Hagar gave birth to a son, Ishmael, but God made it clear to Abraham that this wasn’t the heir He had promised. The heir through whom God would bless the nations would be Sarah’s son, and his name would be Isaac (Genesis 17:19). God fulfilled that promise, and Isaac was later born.

Some years pass, and we now arrive at the episode where God asked Abraham to sacrifice Isaac. Having read the backstory, you should quickly spot a problem: God promised that Abraham would bless the nations through the descendants of Isaac, but now God is asking Abraham to kill Isaac. We’ll come back to this tension—the key to understanding the whole passage—after seeing how the story ends.

Despite the difficulty of the request, Abraham dutifully obeyed. He took two men and Isaac with him to the requested location. Abraham told the men to wait while he and Isaac went to “worship,” and said they would return. When Isaac asked his father where the lamb was for the sacrifice, Abraham responded that God would provide it Himself. Upon arrival at the chosen location, Abraham laid Isaac on an altar he had built and took out his knife to kill his son. At that moment, an angel of the Lord called him to stop, saying, “Now I know that you fear God, seeing you have not withheld your son, your only son, from me” (Genesis 22:12). A ram appeared in a thicket nearby, and Abraham sacrificed the animal instead of Isaac.

Now we have the background needed to look at three key things we should take away from this admittedly difficult story. First, Isaac was never actually sacrificed. Obviously, God knew when He made the initial request that He would eventually provide a ram and would not allow Abraham to actually kill Isaac. If a human sacrifice was never God’s intent, no one can claim this story shows God approves of such actions (especially given the prohibitions elsewhere). The most a person could suggest is that God was cruel to ask something so difficult when He had no intention of letting Abraham do it. But there was a good reason, as we’ll see.

Second, God’s purpose in this event was to test Abraham’s faith (Genesis 22:1). As the ancestral father to the Israelites and, eventually, the Savior of the world, Abraham was to become one of the most important figures in God’s plan for mankind. God wanted the man in this incredible position to demonstrate great faith. The ultimate test of Abraham’s faith in God’s promises was to ask him to eliminate the only apparent possibility of those promises ever being fulfilled: Isaac. If Abraham followed through, he would demonstrate his faith that God wouldn’t break His promises—even if their fulfillment sounded impossible given what God was asking.

Last, Abraham passed the test with flying colors. Recall that Abraham told the men that both he and Isaac would return. The text doesn’t say how Abraham thought that would happen, but clearly he believed God would make a way. Also, when Isaac asked about the sacrifice, Abraham told Him God would provide it. Given the other details, there’s no reason to believe he was simply lying to Isaac. Abraham believed God would provide a way. And God did.

The story of Abraham and Isaac in no way demonstrates that God condones human sacrifice—God never actually let the sacrifice happen. Why God would make the request can be hard to understand, but the answer becomes clearer when we consider the theological context of God’s desire to test Abraham’s faith in a major way.

When your kids ask a question you’re not sure how to answer, the best thing you can do is praise them for thinking about it and tell them you’re going to research it (or research it with them if they’re old enough). If you find in your research that we truly don’t know the answer to their question, be honest and tell them as much. Emphasize that God gave us all we need to know and that we don’t always have all the answers we wish we had.

But we must be very careful not to jump to that conclusion before we know it’s actually the case. When we do, we risk opening our kids up to alternative “explanations” that can eventually lead them to some very wrong views.