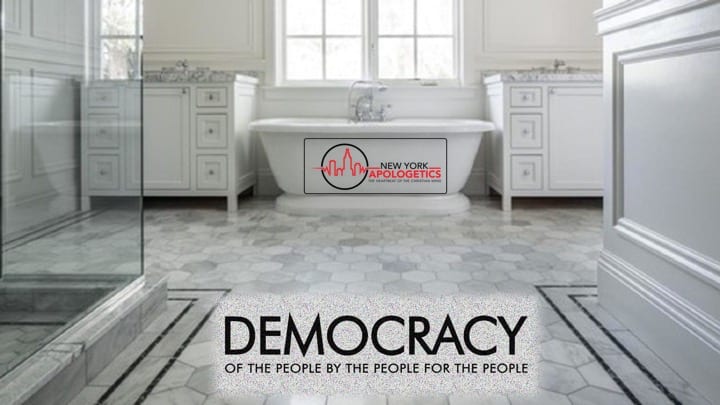 Martin Niemoller was a prominent Protestant pastor who emerged as an outspoken public foe of Adolf Hitler and spent the last seven years of Nazi rule in concentration camps.

The bathroom bill controversy continues as the two sides argue over who is morally correct.

2. Fighting over morality points to an objective moral standard.

It is horrifying as the corporate elite take over our democratic process in plain sight.

Here is a quote from one such article,

“The Texas Assn. of Business has also run radio ads warning that an “unnecessary” bill deemed to discriminate against transgender people may cost Texas the 2018 NFL draft.”

This is an outright threat to the democratic process. What is being said here, that if you vote against us we will harm you?

Here is another quote,

“Leaders of more than 50 Houston-based businesses, including BP America, Chevron, ExxonMobil, Shell and Halliburton, signed a letter to Republican Gov. Greg Abbott urging him not to sign a so-called bathroom bill that would harm their ability to attract and retain talent from around the world.”

This one blatantly puts money above morality?

Is our morality now based on business? What ever side of the argument you are on, you should be outraged at what is happening to our democratic process!

Fighting over morality points to an objective moral standard

Both sides of this transgender bathroom bill are claiming moral high ground.

Judging by the outrage on both sides this is more than statistics. Both sides seem to imply that there are moral standards which are being violated to the point of injustice.

If this is true, then everyone is appealing to the same moral standard, which would have to be objective and not subjective.

Where would an objective moral standard come from?

You cannot have an objective moral standard without God. Think about it!