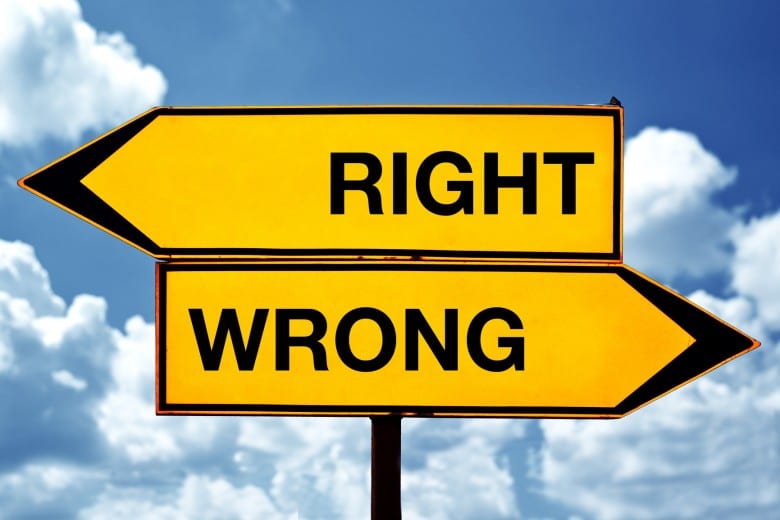 I recently read Gregory E. Ganssle’s book Thinking about God: First Steps in Philosophy. In his book, Ganssle provides 5 particular views pertaining to morality. As one examine these views, it becomes clear that one view of morality stands above and beyond the value of the other moral opinions. Many of these lesser viewpoints have invaded the mindset of many modern individuals. However, it becomes clear that only one is valid. So, what are the five views of morality?

Ganssle describes the error theory as one that “holds that there are no moral facts. This theory denies them altogether.”[1] This theory holds that it is factually wrong to claim any form of morality. Thus, one could not say whether it is wrong or not to torture an animal or person. The error theory, while held by some philosophers, could be attributed to some Eastern religions which claim that good and evil are just illusions and not real.

From the outset, one should be able to deduce the great problems found in the error theory. For instance, the one who claims that the error theory is correct will dismiss such a theory the moment the advocate claims some form of act (i.e. racial discrimination, the Holocaust, terrorist acts, etcs.) as wrong. Thus, the error theory collapses upon itself as most everyone will acknowledge the existence of good and bad behaviors.

Upon careful examination, anyone can see the great problem with this theory. For example, if person A (we’ll call him Adam) is driving along and person B (we’ll call him Bob) steals Adam’s car, Adam may say, “Hey, that’s not right.” But according to individual relativism Bob would be justified in saying, “Hey man, it’s not right for you but it is for me!” However, we all know that it is morally wrong for anyone to steal another person’s car. A judge in a court of law will let Bob know quickly about the failures of his philosophy when sentencing him to jail time.

Why do so many jump on board with this philosophy? I think Ganssle is correct in saying that “I…think that people do not want other people to tell them what to do and that people do not want to tell others what to do. If morals are individually relative, then no one can tell you that something is wrong.”[2] Passivity, however, do not justify wrong thinking. Neither does a prideful heart. Individual relativism implodes the moment the individual relativist is a victim to an immoral act.

Most people are horrified by the ruthless brutality of Adolf Hitler, Joseph Stalin, Pol Pot, and extremist terror groups. However, if one accepts cultural relativism, then there is no basis for condemning such actions. For Hitler, he felt that he was doing the right thing according to his flawed moral viewpoint. Yet, cultural relativists hold no ground to condemn beheadings, gas chambers, and mass bombings if each culture establishes their own moral code. The cultural relativist begins to think more objectively than relative in such cases, as they should.

The Evolutionary Theory of Morality

The fourth theory is called the evolutionary theory of morality. According to this theory, it is held that treating other people in good ways rather than bad helped the human species to survive. Thus, the theory holds that morality falls in line with Darwin’s “survival of the fittest” philosophy. However, it is apparent that the theory holds some flaws.

Ganssle rightly notes that the evolutionary theory of morality “does not explain morality.”[4] Setting aside one’s acceptance or rejection of the evolutionary theory, this moral theory does nothing to define morality. For the evolutionary theorist, morality coincides with survival of the human species. This brings us to another flaw. Many societies have sought to destroy other groups of human beings. Catastrophic wars do not seem to help the human race survive. Rather than helping the species survive, war often threatens human existence. Wars are fought with both sides thinking they are correct. Therefore this theory tends to find itself in a form of cultural relativism which we have already denounced.

So where does this leave us? It leaves us with the final theory of morality which appears to be the clear choice.

“Morality deals with what is right, as opposed to wrong. It is an obligation, that for which a person is accountable.

An absolute moral obligation is:

an objective (not subjective) moral duty—a duty for all persons.

an eternal (not temporal) obligation—a duty at all times.

a universal (not local) obligation—a duty for all places.

An absolute duty is one that is binding on all persons at all times in all places.”[5]

“Moral absolutes are unavoidable. Even those who deny them use them. The reasons for rejecting them are often based on a misunderstanding or misapplication of the moral absolute, not on a real rejection of it. That is, moral values are absolute, even if our understanding of them or the circumstances in which they should be applied are not.”[6]

Objective morals, thus, point towards the necessity of an objective law (or moral) giver. That objective lawgiver is none other than God.